I teach music composition lessons online. Often an area of study we focus on in great detail is orchestration. This is of tremendous importance to all Film and Video game composers. I have included below some general principles to keep in mind when writing a piece for full orchestra. If this seems in anyway confusing or too complex why not drop me an email and ask about online music composition lessons.

Balance can be defined when instruments combine, balance and match in such a way that each chord sounds as one unit and when no notes protrude, disappear, or seem foreign to the overall timbre of the chord.

It can be said that balanced harmony aims for equality between the different notes of any given chord – as in the kind of harmonic equality easily found by playing the chord on the piano.

Harmonic balance is most simply achieved if identical instruments are available, as for

If it is necessary to use different timbres in the same chord, the working out of satisfactory harmonic balance can be an elaborate procedure, with many limitations and ramifications 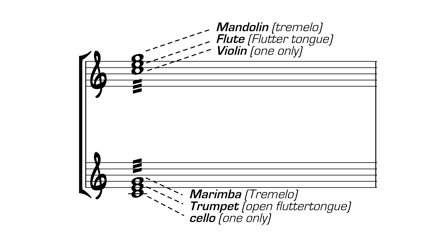 The C-major chord presented in this fashion could nevertheless be identified as a C-Major chords due to its familiarity. However the more extended the harmony the more need for instruments that will produce a balance. Otherwise it may seem as merely six unrelated notes.

Requirements for harmonic balance are as follows

Four Violins playing this passage in unison will obviously produce a thinner sound than eight, ten or twelve violins in unison playing the same passage. The tone quality is substantially the same, the volume can be the same, the difference is in thickness and thinness only.

When all four conditions have been met, the resulting sound is clear, balanced harmonic unit, or a harmonic succession, in which the closest synchronous relationships between all the notes in each chord is achieved.

If certain notes persistently protrude, disappear or seem foreign in tone quality, the trouble can be traced to some inequality of volume, timbre or fullness.

Some examples would be

Openness can be matched, but the open trumpet will stand out because of it’s much greater fullness.

In this example a balance in volume can be achieved but the “nasality” of the oboe will cause it to stand out.

In the final example the timbre will match – both sound nasal – but the oboe is unable to match the volume of pp. At best a mild mf will occur.